A Snow Leopard Has Discovered a Pumpkin, and If This Isn't a Fall Mood, What Is? 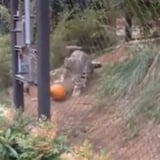 A snow leopard in a zoo was given a pumpkin as enrichment (for play). We think he likes it!

Posted by The Biodiversity Photoblog on Friday, April 12, 2019

As soon as the weather gets chilly, I pull out my flannels, schedule a leaf-peeping tour, and start planning my always-epic Halloween costume. And apparently I should ask this playful snow leopard to come along on my adventures, because after being given a pumpkin to play with, it's clear that he loves Fall just as much as I do.

While a group called The Biodiversity Photoblog shared the heartwarming video on Facebook back in April, it's picking up speed again thanks to the changing of the seasons. They shared it with the caption, "A snow leopard in a zoo was given a pumpkin as enrichment for play. We think he likes it!" I certainly have to agree - now let's gear up for our favorite season, shall we?!