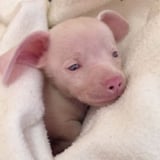 Dear reader, I'd like you to take your phone, click Instagram, hit the search button, and type in pinkpigletpuppy. Then, you're going to slam that "Follow" button harder than you've ever slammed before, and you can thank me later. I'd like to introduce you to my new favorite Instagram follow and soon to be your favorite follow: Piglet the pink puppy. Piglet is blind and deaf, and he's on a mission to inspire kids to embrace what makes them unique. He's a double dapple Dachshund Chihuahua mix and was born blind and deaf with 37 other puppies in a hoarding situation.

Piglet and his owner Melissa are animal welfare advocates and make it their mission to spread the message of the "severe consequences of double dapple breeding," which happens when two dapple Dachshunds mate. They can be born with congenital eye and ear defects. In an interview with People, Melissa, a veterinarian from Connecticut, said that taking care of Piglet is "like a full-time job." She added, "But he's so cute, and we couldn't give him away at that point." She said she initially planned on just fostering Piglet, but after two months in the family with their six other dogs, they knew they had to keep him longer.

"He has a gigantic presence even when he is sleeping wrapped in a blanket."

"It took a few months for him to gain control of his anxiety and settle into his routine with his dog and human family. But once things started to click, it was full speed ahead," they wrote on Instagram. "He has a gigantic presence even when he is sleeping wrapped in a blanket. Piglet faces his many challenges with a positive attitude. He has moments of frustration as would be expected, but he moves through them with perseverance and dignity. He is a very special little guy."

Just to clear things up, on Instagram, the owners explained why the tiny cutie has a pink appearance. "Piggy's hair coat is white, not pink. His white hair coat is due to the unfortunate fact that he is a double dapple. And due to his breed mix of doxie and chi, he has such thin short fur on his face and ears that his pretty pink skin shines through. His under carriage is completely hairless so again, his skin is smooth and pink. He truly is a pretty pink puppy," they wrote in a post.

When Melissa adopted Piglet, she wanted to make sure he "had some bigger meaning," which is why they came up with the Piglet Mindset and the Piglet Mindset Outreach program. Melissa and Piglet visit young children at schools to teach them about overcoming challenges and how to maintain a positive mindset. Check out some adorable photos of Piglet ahead, and find out more about the program here.

Related:
A Photographer Took Photos of Her Dachshund's Puppies, and It's Even Cuter Than Her Maternity Shoot

It Is the Reason I Hate Clowns, but This Cat Dressed as Pennywise Is Absolutely Hilarious

Dog Takes On Leaf Blower — And The Results Are Absolutely Perfect